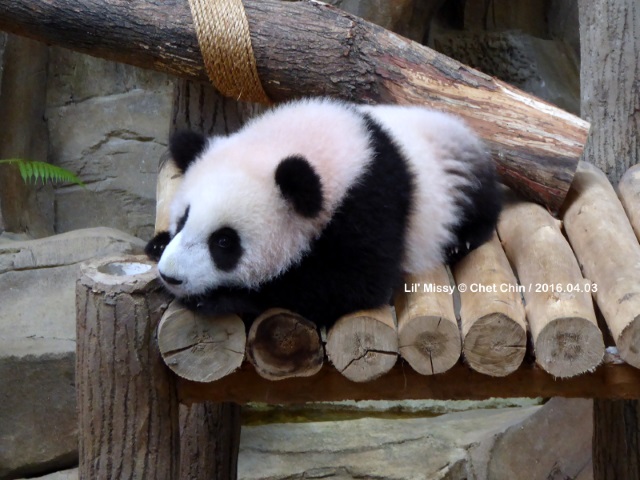 Not yet. Feng Yi’s daughter will receive her official name on 7 April 2016.

Like her mother Feng Yi and her big brother Gong Gong, I’d given her a name. I started calling her Lil’ Missy from the myPandas family photo album dated 29 February 2016. I didn’t realise it at the time but that’s quite an auspicious date to have named her.

I’d adopted both her mother Feng Yi and her big brother Gong Gong through Pandas International (PI) when they were a month old (Feng Yi in September 2006 and Gong Gong in September 2013). At the time, they hadn’t been named yet. For both of them, PI asked me if I had my own names for them. I sure did, although I did spend some time thinking about what I wanted to name them.

I’d named Feng Yi Yoong Ping (永平), which means “Forever Peace”. Here’s the story behind Forever Peace. Wolong Panda Center later held an online naming competition for all the cubs born in 2006, the year of her birth, to commemorate the milestone of 18 births in their captive breeding programme, a record number at the time. I nominated my name for her and all my panda pals voted for it but it lost to her chosen name “Feng Yi”.

I’d named Gong Gong Feng Er (鳳兒 [traditional Chinese] / 凤儿 [simplified Chinese]). Since he was Feng Yi’s firstborn, I wanted a name that linked him to her so I took her first name “Feng” and added the Chinese character for “child”. Feng Er, child of Feng Yi. When he was around 3 or 4 months old, he was adopted for life by a Chinese liquor company and named after the company’s flagship liquor. No competition for his chosen name.

Lil’ Missy’s not really very Chinese, is it? I do have a Chinese name for her, which I’d entered in the naming competition held by the NRE (Ministry of Natural Resources & Environment) in their search for a suitable name for her. I was told (but I’m not sure how reliable the source is, or whether they were having some fun at my expense) that the name was in the list that was sent to the China Conservation & Research Centre for Giant Panda (CCRCGP). Since I haven’t heard anything official, I don’t think it was chosen. I’ll reveal the Chinese name I gave Lil’ Missy after her official name is announced on 7 April 2016.

Whatever her chosen name, and whatever the name I gave her, Feng Yi’s daughter will always be Lil’ Missy to me.