This is one time I am glad I am a hoarder. I have kept the clipping Pandas International‘s director Suzanne Braden sent me in early September 2006 about the birth of a pair of twin panda cubs; I was interested in adopting the elder twin.

Birth announcements of giant panda cubs are not rare. But this one was; the elder twin had been born with a harelip and various other ailments that the vets discovered during the first check-up, along with the fact that it was a male.

Right at the end of the announcement, highlighted in yellow in my copy, is a second announcement that three hours after the birth of the first cub, the mother had given birth to a second baby at 3:05 a.m., a female panda baby, weighing in at 135g, who was being looked after by the mother herself.

That second baby is Feng Yi. She was not my first choice; her brother was. But when he died, Suzanne wrote to tell me and to ask if I wanted to adopt his little sister.

I guess I did cuz here we are, 10 years later, and she is here in Malaysia, living in Zoo Negara Malaysia. But here’s the strangest thing: I can’t find the email in which I agreed to adopt her, only Suzanne’s email to Wolong Panda Club, and the Club’s reply. 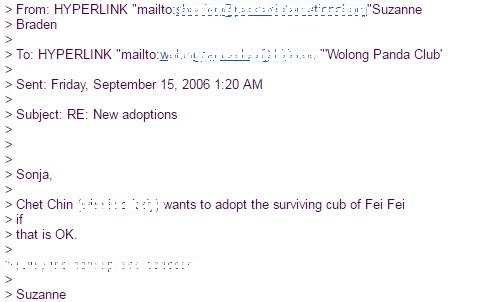 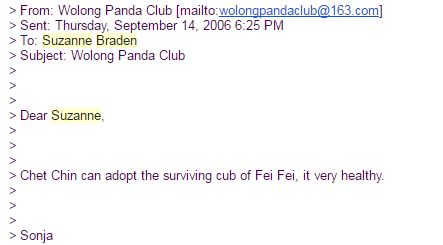 I guess I’m not such a hoarder after all. But I kept the important adoption papers.