In the world of giant pandas, babies are usually born between July and September each year. While there are some early babies born as early as May and some late-comers bringing up the rear as late as November, the most number of panda cubs are born in the month of August. For some reason, panda cubbies like to be born on a particular date in August, the 23rd*. The latest cub to be born on that date is Bao Bao of the National Zoo, Washington, DC. Here in Malaysia, we have not one but both our pandas born on that day. Not only that, both Fu Wa and Feng Yi were born on the same day, month and year – 23 August 2006. Visitors to the panda complex have asked if they are twins. Goodness no; if they were, we’d have a problem. It’s just another “coincidence” which adds to just how special they are.

As a first-time “mother” back in 2006, I wanted to do something special for her on her first birthday. At the time, my schedule was such that I would only make it to see her the next month but I wanted to help her celebrate that special day. I requested Pandas International‘s help to ask for something special to be given to her on that day. The keepers were kind enough to do just that and also take photos which were sent to PI to be forwarded to me. Here she is on her first birthday on 23 August 2007. 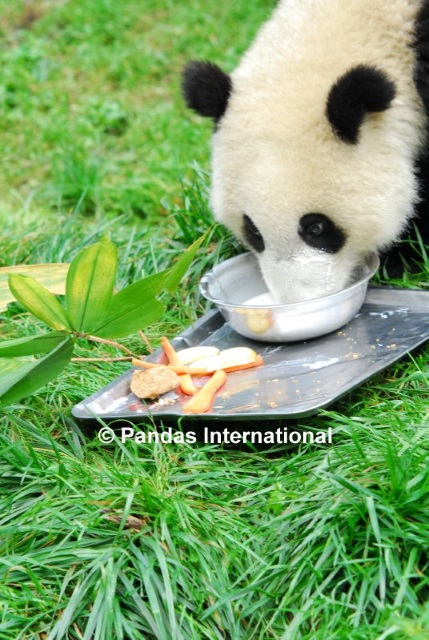 A little extra milk, wowotou, carrots and apples on her first birthday

In August 2009, Feng Yi turned three. I saw her in May that year shortly after her return from Beijing with the other seven Olympic pandas. For her birthday that year, Wolong Panda Club organised a cake for her and sent photos. 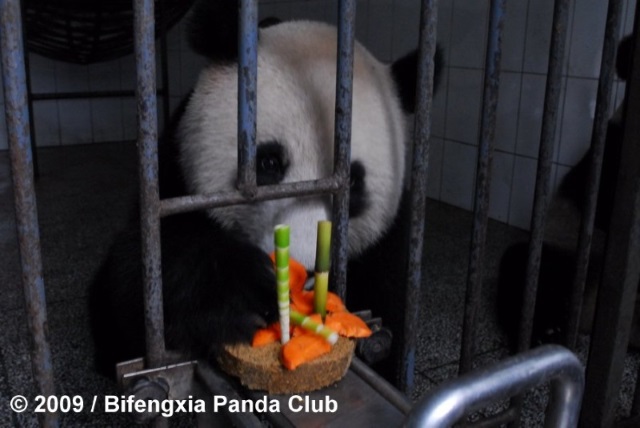 There were three bamboo shoots, each representing one year, but she knocked one
over almost as soon as the cake was presented to her

By in August 2010, Feng Yi had lived in Guilin almost eight months; she and Mei Xin, another Olympic panda, had been sent there in late December the previous year. By that time, too, my schedule was my own and I was able to visit her. I decided to time it so I could be with her fourth birthday. I asked the keepers to make her a cake which featured all her favourite food items. 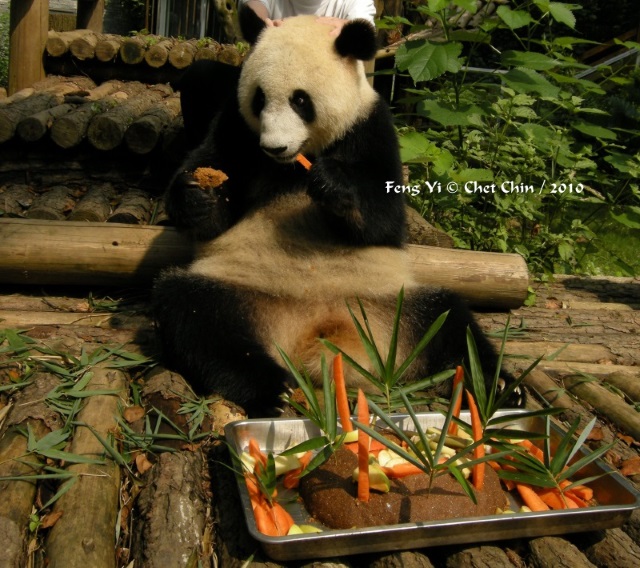 Feng Yi and her fourth birthday cake – lots of carrots, apples, bamboo leaves
and the main centrepiece, a huge wowotou

As I write this, we are eight days away from her eighth birthday. It will be her first birthday in Malaysia, and also the first for Fu Wa. Last year, there was a special birthday celebration for both of them in Bifengxia Panda Base, their last in China for the next 10 years. As it turned out, Feng Yi missed the party because she gave birth five days before her seventh birthday on 18 August 2013. To make up for it, this year’s promises to be extra-special.