As I write this, Fu Wa and Feng Yi have been in Malaysia 14 days and at the half-way point of their quarantine period.

For the record, their panda plane touched down at the MASkargo landing field around 8:00 a.m. on Wednesday, 21 May 2014. As with their departure, articles and videos about the arrival have been published, including a short clip on BBC News. As with their departure, I was also at their arrival; it was a dream come true for me to be in both places, first to see them leave the panda base and then to see them arrive in Malaysia.

Here is my mishmash report of the day accompanied with photographs mostly mine and a few borrowed from The China Press. There is also a photograph not taken on the day but when you see it, you’ll understand why it’s here.

I had envisioned seeing the plane in the air, a small dot growing bigger as it descended onto the landing strip. But I was distracted looking at the media crowd and then telling someone that the plane would be landing soon, only to be told by someone else that the plane had landed. I was also facing the wrong way and turned to find that indeed, the plane carrying Fu Wa and Feng Yi had landed in Malaysia and making its slow way to a designated spot for a water salute welcome. 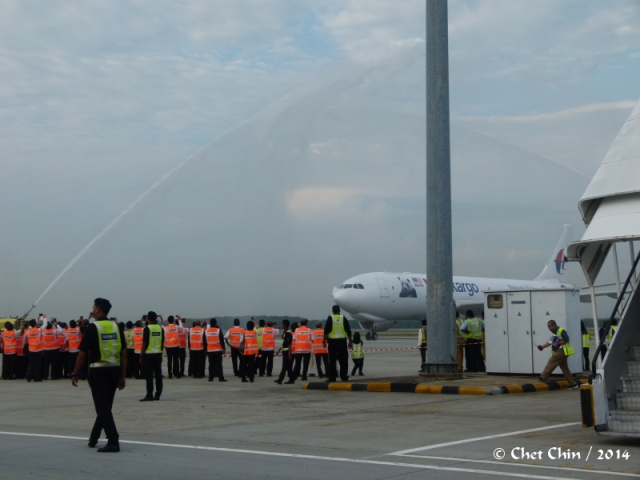 For the next 20 minutes or so, the media waited as first, the human passengers (two senior members from MASkargo and the two vets, one from each country) came off the plane, followed by the opening of the cargo door to unload the two very precious crates. 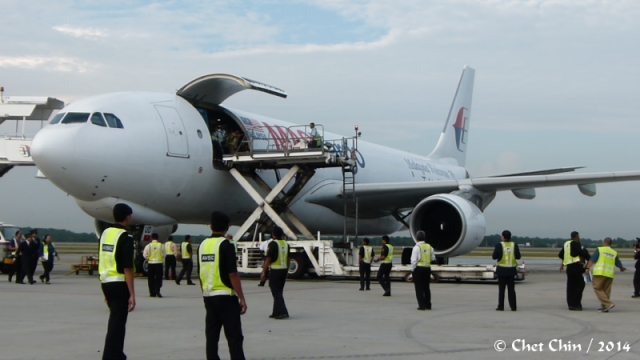 Getting ready to unload the very precious crates 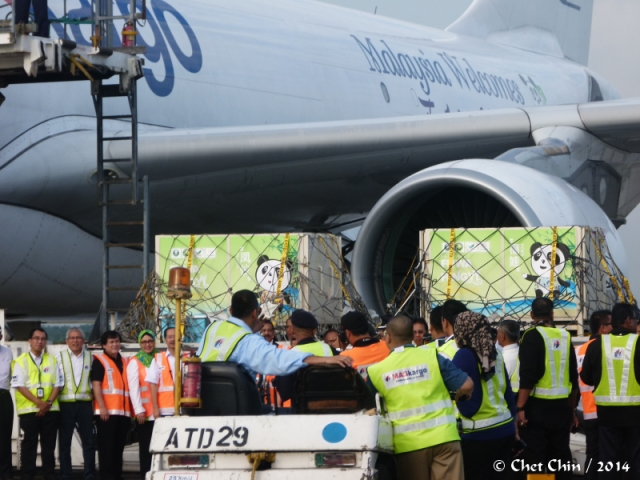 A vet and a keeper from the panda base had accompanied Fu Wa and Feng Yi to Malaysia. The vet, Dr Li Caiwu, had flown on the panda plane with the Malaysian vet, Dr Mat Naim bin Haji Ramli. The keeper, Mr Yang Haidi, was with us on the flight from Chengdu. He is also an old friend I’d met in Wolong in September 2007. At the time, he was looking after the 1-year-olds in kindergarten 1. Among the 1-year-olds in that kindergarten was Feng Yi. Coincidence or was Mr Yang chosen to accommpany Fu Wa and Feng Yi because of this connection all those years ago? This was a question China Press reporter Penny Ee had asked me. I told her I didn’t think so. 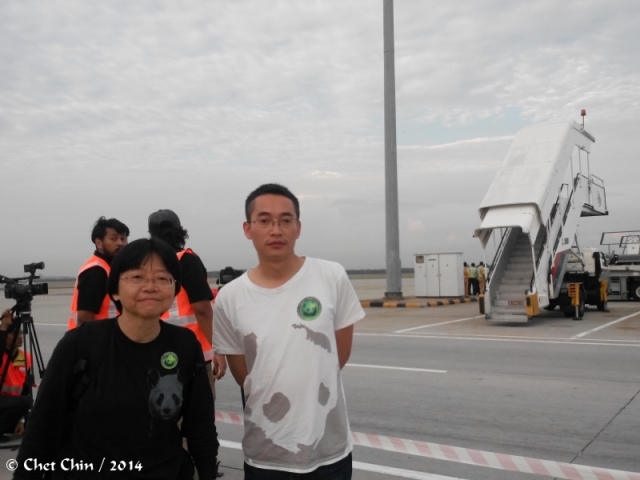 With Yang Haidi waiting for the panda plane’s arrival 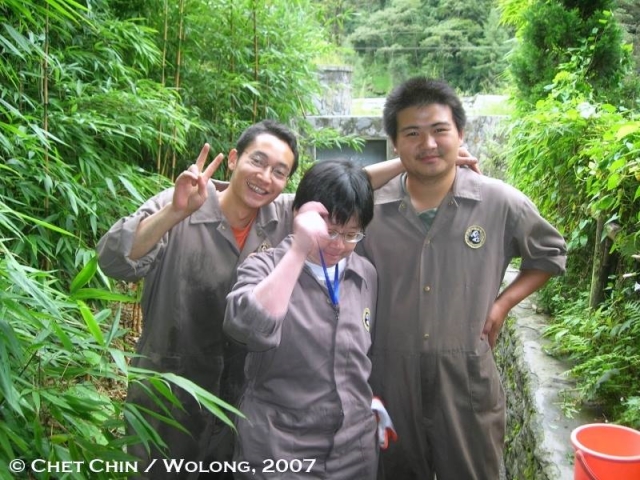 It was no surprise the media reps were eager to get their first glimpse of our Malaysian pandas. They had also been at MASkargo since 5 that morning and were a little tired with the heat and the waiting. So when they saw the precious crates being driven to be loaded to the waiting truck, some of them started shouting to let their feelings known. Eventually a crate was unloaded and driven towards the media. One look at the red batik clad panda on the front of the crate and I knew Feng Yi would be meeting the media. But the vehicle was coming too close and the media was getting a little too excited and rowdy. There was actually a pandamonium moment when photographers in the back row surged forward and crashed into those in the front row who lost their footing and fell to the ground. I was one of those in the front row. With all this going on, I missed the opportunity to get my own photo of Feng Yi peeking out at the media. 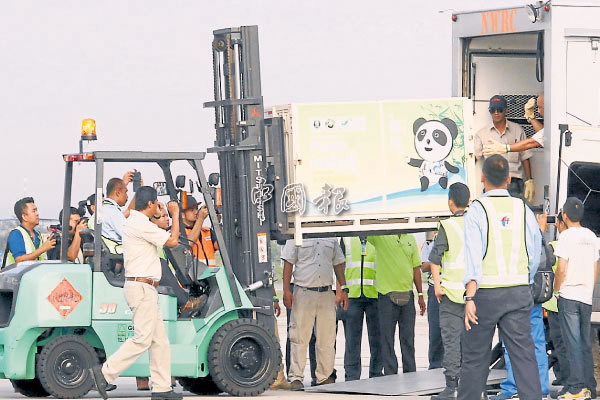 Fu Wa’s crate being loaded to the truck (Photo: The China Press) 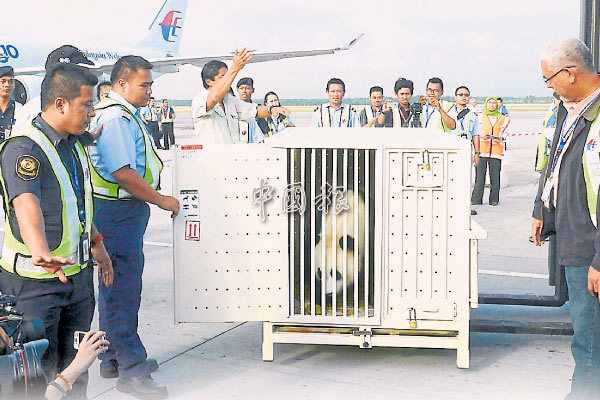 A second group of media waiting at the giant panda house would also get to see one of the giant pandas after they arrived. The situation there was under control as they were told to stand back eight feet from the entrance into the quarantine area, and also to keep quiet when the panda was unveiled to them. They complied. Again, it was Feng Yi who met the media at the giant panda house. I thought it was a random choice but after hearing from Dr Li how the two of them fared during the flight, I realised it was not. He remarked that before the flight, Fu Wa was calm while Feng Yi was a little restless. However, once the flight got underway, the situation reversed; Feng Yi calmed down and ate throughout the journey while Fu Was got restless. Based on that, they decided Feng Yi would be the better panda to meet the media upon arrival.

This was actually the first photo I took that morning. The timestamp on the photo says 6:48 a.m. We had just arrived at the Animal Hotel in the MASKargo area and I was immediately drawn to the truck. Guess why? The banner on the side.

This was the same truck that took Mr Yang and me into the tarmac area to meet the plane. I would later sit in the truck to go to the zoo. Once underway, I realised that we were not only part of the panda convoy but that with us in the truck, in his own spacious area behind us was the one and only Fu Wa. 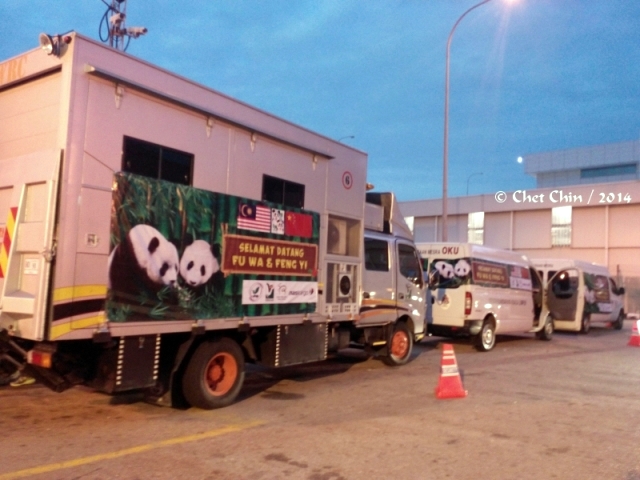 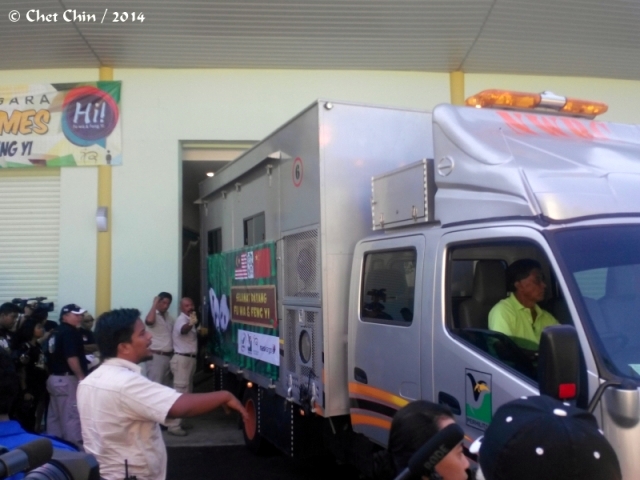 The most amazing welcome

We left MASkargo around 9:08 a.m. Blur me would soon realise that we were in a convoy with police escort that included two outriders to stop traffic for us to get through. I’m sure it was a special “road trip” along quite a few roads to show off the Malaysian giant panda pair. At one point, I saw a motorcyclist slow down to turn and look at the truck I was in.

And then we’d arrived at Zoo Negara Malaysia. The convoy entered via the exit (go figure) and turned left into the most amazing welcome ever. The area immediately past the turnstiles into the Zoo was crowded with reporters, photographers, videocameramen and groups of children in different coloured T-shirts all waving fans with 3D giant panda photos and shouting “Fu Wa Feng Yi! Fu Wa Feng Yi!” Finally I had the sense to take up my camera to photograph the groups of children. There were at least four groups spaced out along the route to the giant panda house. I managed to get two of them. 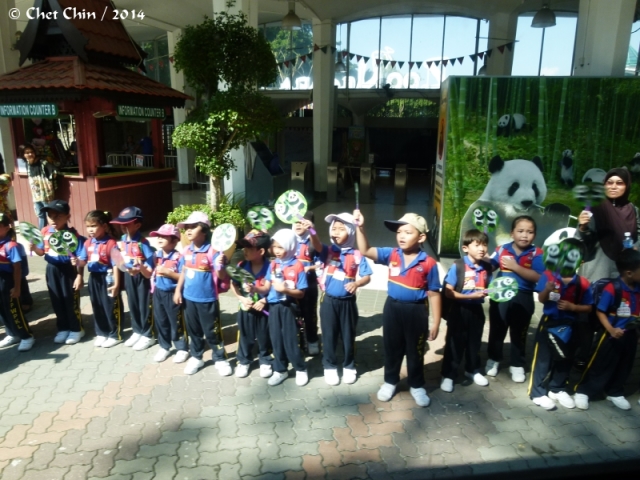 The first group just behind the turnstiles 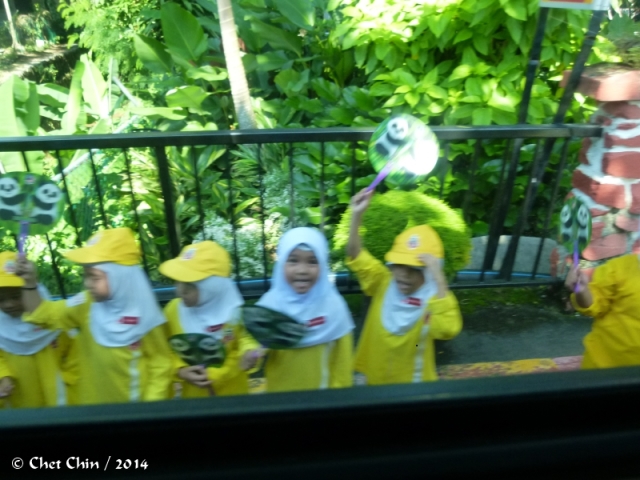 The group lined up along the bridge 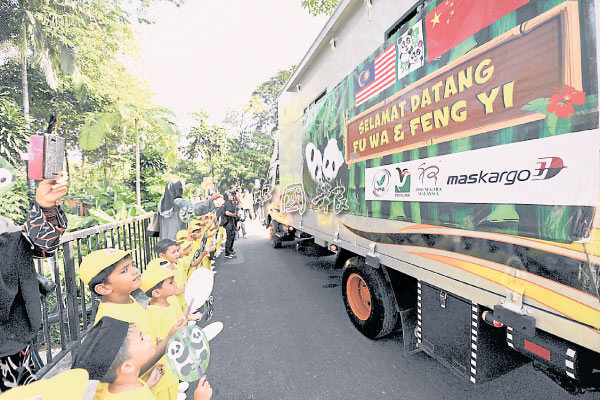 From the children’s point-of-view, looking at Fu Wa’s truck (Photo: The China Press)

As I looked out at all the children welcoming Fu Wa and Feng Yi to their new home, I was surprised to feel my eyes tearing just a little. I had expected tears at my first sight of Feng Yi in Malaysia, not three hours later and definitely not over something other than Feng Yi.