To commemorate the signing of the giant panda loan agreement between China and Malaysia back in June 2012, the Natural Resources & Environment (NRE) Ministry had announced a naming competition to find new names for the pair coming to Malaysia.

What’s become of the naming competition?

At the unveiling of the giant panda house at Zoo Negara Malaysia recently, the NRE Minister said “The Prime Minister will be announcing the new names for Fu Wa and Feng Yi. We have already given the list of suggested names to him.”

If they do get new names when they arrive in Malaysia, it will be Feng Yi’s third name (well, as far as I know). Feng Yi, her official name, is actually her second name. Before her official name, there was another name, her first, which I’d given her.

As her first adopter, I was asked if I’d like to give her a name. I thought about it for quite a while, in fact, longer than it took me to come up with Feng Er’s name, but then, she was my “first-born”, and I wanted to come up with a meaningful name. I eventually came up with this one and even made a digital painting of it, too. 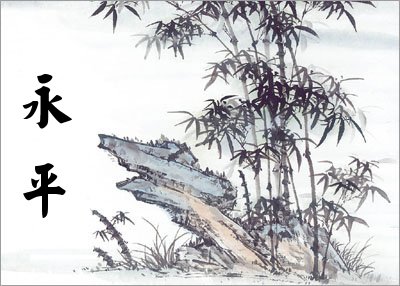 Her first name is Yoong Ping (Mandarin pronunciation), which means Forever Peace in English. I’d named her for both my parents and my niece.

“Ping” , the second part of the name, means “peace” and was the nickname my parents used for each other. They had met in the late 40s amidst post World War II unrest in our country, and peace was what they wished for the country.

A while after I named Yoong Ping, Wolong Panda Center announced that a competition would be held to name the 18 cubs born there in 2006. By then, I was a member of an online panda discussion group, Pandas Unlimited, on Flickr. Friends on the group nominated Yoong Ping’s name for the competition and voted continuously for it. Unfortunately – or maybe, fortunately – our votes were not enough, and Yoong Ping was officially named Feng Yi.

And now, Feng Yi might have a third name.