By the time I arrived in Bifengxia Panda Base on 11 September 2012 for my second visit of the year, Feng Yi and Fu Wa had been back there 36 and 28 days respectively. By then, both of them had settled in and were coming indoors when called.

I was told when they first returned, they would spend most of their time in their yards, and sometimes even up among the trees. Often, the keepers had to walk deep into the far end of their yards to feed them. So it looked like I had chosen the right time to visit. But then I usually visit at that time of year.

Of course, the main reason Fu Wa and Feng Yi were housed together was to allow them to get to know each other better ahead of their journey to their new home in Malaysia.

Villa #4, where they were housed upon their return, is part of the BaiXiongPing (White Bear Ground) “neighbourhood”, but located away from the main area and also further in from the main road. Visitors walking by who noticed the villa would usually see a locked door which often discouraged further curiosity. If they followed the path to the door, they would likely turn to the left, walk down a short path and come to the viewing half-wall that looks into Fu Wa’s yard. If they were lucky, they might see him, often in the yard or sitting at the connecting door. After taking photos of him, they would probably leave, thinking he was the only panda in the area, not knowing there was another panda literally just around the corner. 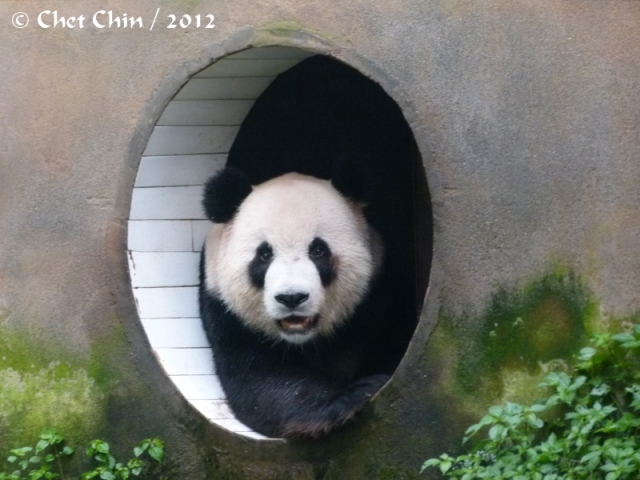 A smiling Fu Wa at the connecting door of his room

Feng Yi’s yard to the right of the door is hidden from sight; visitors need to turn a corner before they see the viewing half-wall. What this has meant for me is I got to spend a lot of time alone with her during my visit last September which I think (and hope) has deepened our “mother-daughter” relationship. I also managed to spend similar time alone with Fu Wa, especially during the weekdays when there were less visitors. 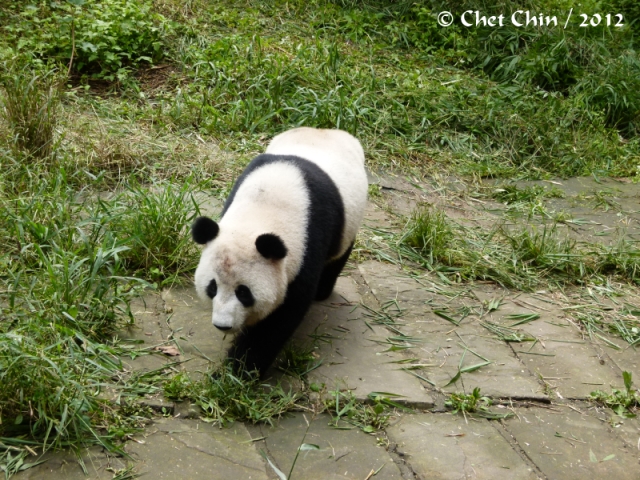 Indoors, Villa #4 has a similar layout to other villas in White Bear Ground. There are three rooms – two big rooms, one each for Fu Wa and Feng Yi, with access to the outside yards, and a small room in between that holds an electronic weighing platform and access from the other two rooms for them to be weighed at designated days each month.

All three rooms have a common front “wall” made of iron bars, which has led many to call the rooms “cages”. While the iron bars do keep the pandas on their side, they enable interaction between pandas and their keepers for feeding and training purposes. The iron-bar wall also allows air to circulate between the rooms and the neighbours to get to know each other’s scent.

Outdoors, there’s a mesh fence separating their two yards. Here, on more than one occasion, I have seen Fu Wa and Feng Yi interacting. The door from his room is closer to the fence which gave him quicker access to walk over and sometimes sit in front of the fence looking into her yard. For her, the fence is further from the door to her room and further from where she liked to sit. Sometimes, it would take a while for her to notice him there and to walk over. But on at least one occasion when I was on his side of the fence, I saw her walk up to the fence, even though he was not there. 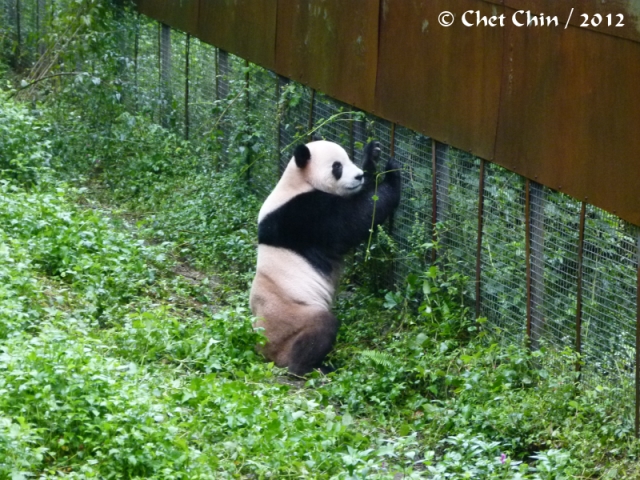 Fu Wa looking for Feng Yi at their “howdy” fence 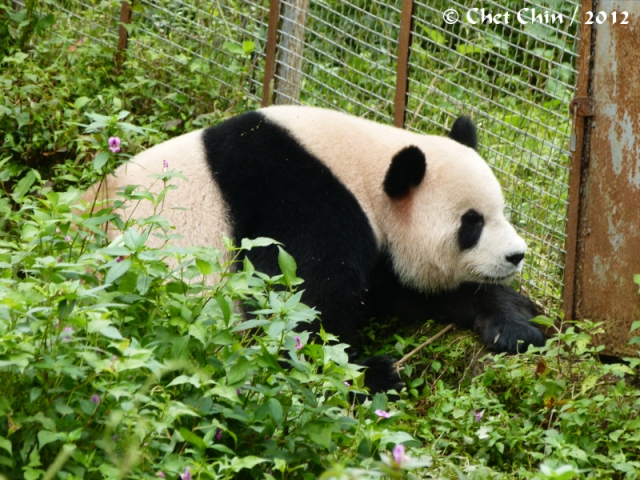 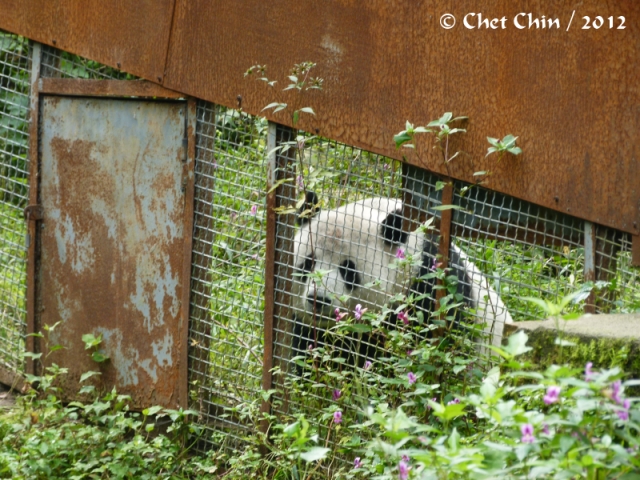 But when Feng Yi shows up, he’s not there … oi, where are you?

As a panda adopter, I have access to more areas at the base than regular visitors, including where my own panda is living if she is in Bifengxia. For this particular trip, I was given even more access to Feng Yi, firstly as her adopter, and also as the adopter from Malaysia visiting the two pandas (one of them my “daughter”) going to Malaysia. I had both “official” and “unofficial” visiting hours with her and Fu Wa, too.

“Official” visiting hours were the daily five or six feeding times that were held inside their villa. During those times, I would get to enter the building with the keepers and any volunteers assigned to the keepers. Sometimes, I would get to feed Feng Yi either some wowotou bread, carrot or bamboo shoot, but I mostly left that to the volunteers who had paid for the privilege to look after them, clean their yards and rooms and feed them. After each feeding time, we would leave the building and the keepers would lock up. This is mostly to prevent visitors from going in. 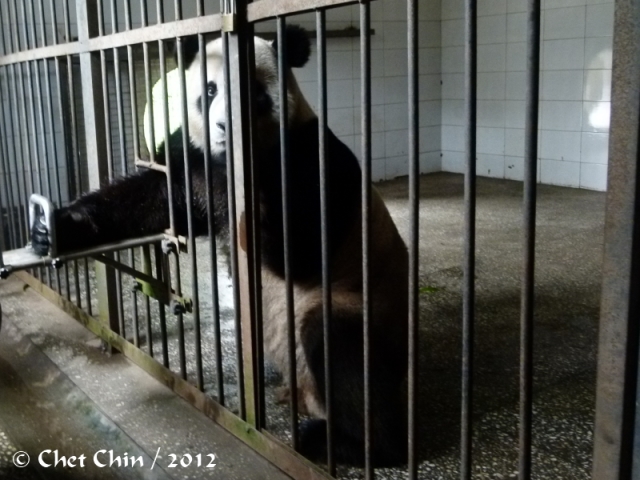 Fu Wa distracted while waiting to be fed 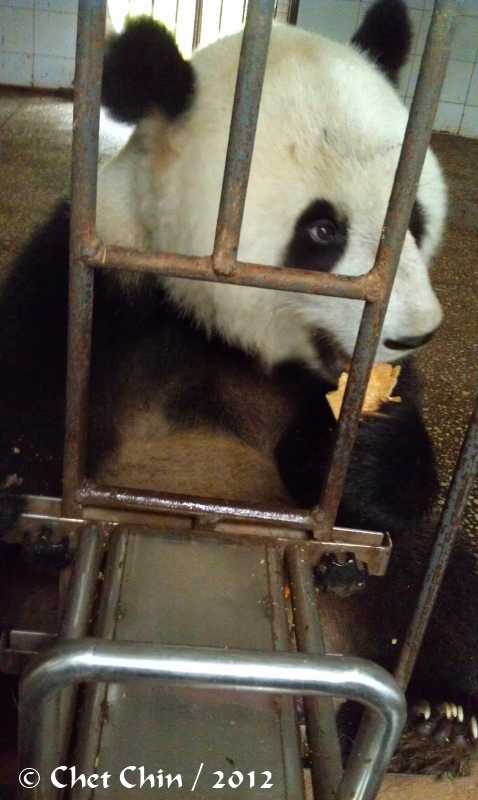 Happiness is sitting across from my “daughter” and watching her eat

“Unofficial” visiting hours depended on whether they were in their yards. For the first couple of days after I arrived, if I happened to pass by their villa, I would walk in to have a quick look to see if either of them were in their yards. If they weren’t, I would call their names. In Feng Yi’s case, she would come out quite soon after (which makes me think she recognises my voice); in Fu Wa’s case, I might need a little more patience before he walked out to the yard. 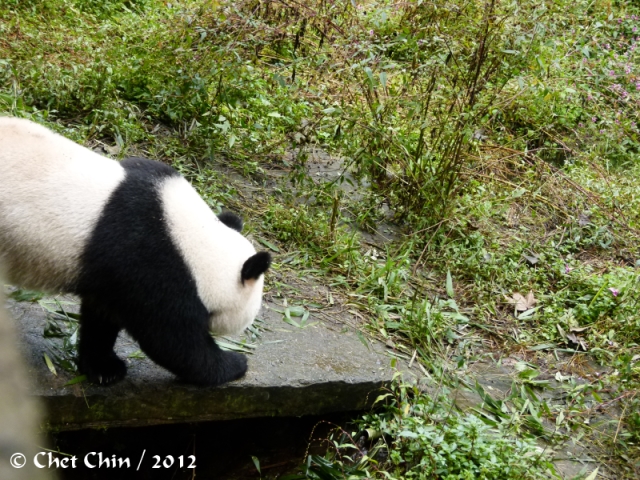 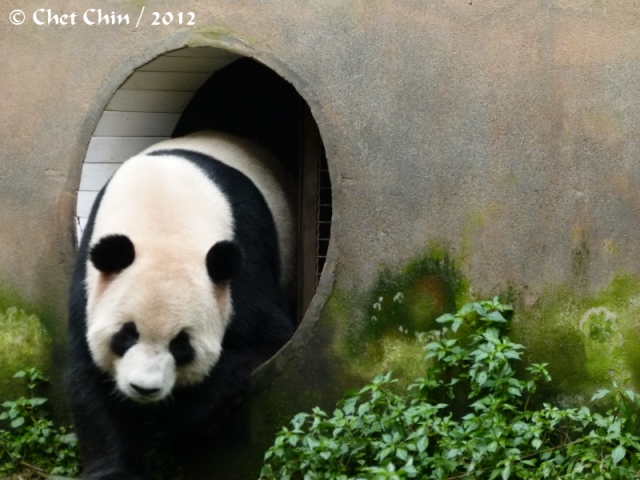 Fu Wa squeezing out of his connecting door

Next week:
Highlights of my September 2012 visit