A few days after Malaysia signed its 10-year giant panda loan agreement with China on 15 June 2012, a Japanese friend posted a link on my Facebook Timeline. The link led to a news item on the website of the State Forestry Administration (SFA) which oversees the China Wildlife Conservation Association (CWCA) that had signed the loan agreement. The news item was about the Malaysia-China giant panda loan agreement; my friend had alerted me to the news item not because it was about giant pandas coming to my country, but because of the information in the first sentence of the second paragraph:

This was information not found in the BERNAMA news item dated 15 June 2012, this was information about the names of the two pandas that will be coming to Malaysia. It was information important to me because ‘Fengyi’, the female panda coming to my country, is the panda I’d adopted through Pandas International when she was just a month old in September 2006.

My adopted panda is coming to Malaysia. This is getting personal.

I was already concerned when I first read about the giant panda loan; what more now that I know one of them is my adopted panda? A common reaction, including my own, to news about the loan: does Malaysia have what it takes to look after the pandas? (this is the more polite version … )

What should I do? Do I protest? Tear my hair out? Bang my head against the wall? No, I did what I know best – I wrote about it, and The Malaysian Insider published it.

The loan is a done deal, the agreement signed. So instead of wasting time and energy protesting the deal, I want to do my part to make sure Feng Yi and Fu Wa are well-cared for when they arrive for their 10-year stay. I hope my fellow Malaysians will, too, when they hear how special our panda pair is.

Yes, every panda is special, simply by being born and surviving into adulthood. Fu Wa and Feng Yi, our Malaysian pair, were born in Wolong in a milestone year for captive giant panda breeding. That milestone year was also two years before the Beijing 2008 Summer Olympics, and the two of them, along with six other pandas born in their year, were chosen to “participate”. Following the Olympics, they were sent to live elsewhere in China, making them seasoned travellers even before flying to Malaysia.

It was a record birth year for Wolong Panda Center in 2006. A total of 20 giant panda cubs were born that year, four more than the previous year, plus another giant panda cub was rescued from the wild. Fu Wa and Feng Yi were among the 20 born in Wolong that year.

When they were babies
(Photos from Pandas International Spring 2007 Newsletter)

The births of the 2006 cubs were celebrated not only in Wolong and China but throughout the world, thanks to the Internet. To commemorate this milestone, it was decided that the names of these 20 cubs would be chosen online via the Internet. In addition, after the cubs were weaned from their mothers and entered kindergarten, webcams were set up in the two yards (one per yard) to broadcast their daily activities to panda lovers around the world.

2006 was also a “model” year that shows just how precarious giant panda lives can be. Of the 20 cubs born in Wolong that year, five did not survive into adulthood; two died within days of being born, one before his first birthday, one before her second birthday and one after his fourth birthday. This is the uglier side of giant panda conservation work. 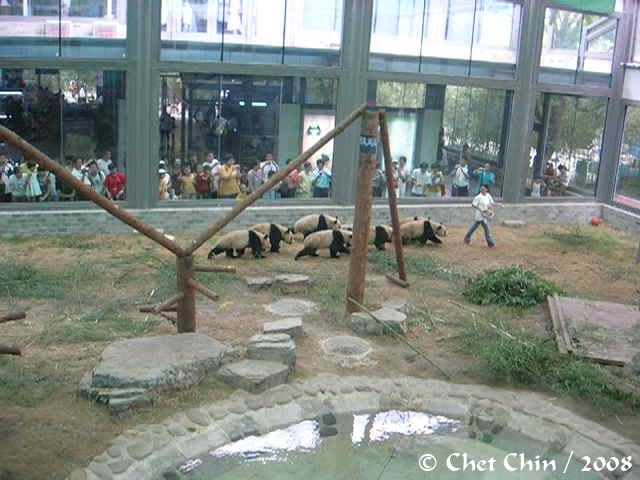 Olympics “Jog for your Food” event – only for giant pandas!
(click on image to go to the video)

Soon after the cubs were named, Wolong announced that eight of them would be chosen to represent Wolong at the Beijing 2008 Summer Olympics, not as participants but in a special exhibit to show off China’s success in captive giant panda breeding. They would be just the right age to still be playing together in the same yard, which would maximise the giant panda cuteness factor; one panda cub is cute but a group of panda cubs is “cuteness overload”.

A grand ceremony was planned to send them on their way to Beijing. Before this could happen, disaster fell on the Sichuan Province: a mammoth earthquake measuring 7.9 struck at 2:28 p.m. on 12 May 2008. But the original plan to send the Olympic 8 to Beijing would proceed, just not as originally planned. Instead of being sent off and driven to the airport in style, there was no ceremony and the eight had to endure a bumpy ride on rock strewn broken roads to stay a night at Chengdu Panda Base before going to Chengdu airport for their flight to Beijing.

Once in Beijing, the Olympic 8 captured the hearts of not just the people in Beijing but also visitors to the Olympics, including Feng Yi’s Malaysian adopter. Following my first volunteer trip to Bifengxia Panda Base in August that year, I’d flown to Beijing for two days, not to watch any of the Olympic events, but to visit Feng Yi and the other seven black and white “Olympians” at the Beijing Zoo. I spent time with their keepers and got to feed her on the second afternoon. 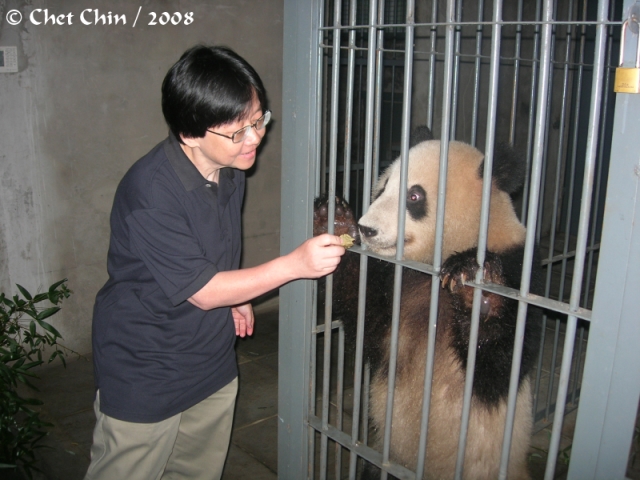 The Olympic 8 stayed on in Beijing past the closing ceremony of the 2008 Summer Olympics and left in March 2009. By now, there was no Wolong to return to, the place having been extensively damaged by the 5.12 earthquake the previous year. Instead, they were sent to Bifengxia, joining the majority of the pandas relocated from Wolong after the earthquake.

On Christmas Eve 2009, Feng Yi and Mei Xin, another Olympic panda, were sent to live in the Seven Star Park, Guilin. Six months later, Fu Wa and two other Olympic pandas, Huan Huan and Tao Tao, were sent to live at the Panda Pavilion in Changyu Dongtian Scenic Zone, Wenling. Both their “secondments” are part of an ongoing education programme to share giant pandas in other parts of China, and also to ease the increasing lack of space in Bifengxia due to successful birthing seasons every year. And there they stayed until they were returned to the “mother” base in August 2012 for their journey to their new home in Malaysia. As we now know, they have yet to fly to Malaysia, and it was a miscommunication that was to work to my benefit.